Home > Ageing Tips > Is there a "Centenarian Gene"?

Is there a "Centenarian Gene"? 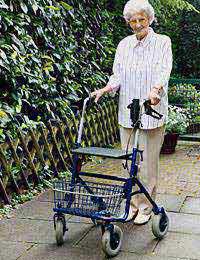 Several recent studies have shown that longevity does run in families. Indeed it seems that the chances of reaching your 100th birthday increase dramatically if one or more parents has already gotten there. These same studies also indicate that even if they do not reach the milestone of becoming a centenarian, the children of centenarians seem to age better, and live longer, healthier lives than people who's parents died in their 70's. All of this then begs the question is there a "centenarian gene"? Researchers at the Albert Einstein School of Medicine think so, and they may have actually found it.

Actually what the researchers discovered is not a naturally occurring gene that is linked to old age, but a gene mutation that seems to lengthen lives. The research was published in the Journal or the American Medical Association, JAMA. According to the results of the study, the scientist found that a gene mutation hat can lead to exceptionally long lives, can be passed along from one generation to the next.

Most genetic mutations are at their least benign, at their worst harmful. But there is the rare genetic mutation that gives that organism an advantage. That is the very driving force behind evolution. The scientists at Einstein may have discovered such a mutation. The gene in question regulates the size of lipoproteins in the body. One such lipoprotein is cholesterol. There are two types of cholesterol. HDL the so-called "good", and LDL, the so-called "bad" cholesterol. The mutation to the gene causes it to make HDL and LDL particles larger then they would normally be. It has long been known that people that produce larger LDL (bad) cholesterol particles have lower incidence of heart disease. The theory being that the larger molecules are to big to escape the bloodstream and form plaque on the arterial walls. According to the study centenarians were three times more likely then the control group to have the mutation. Furthermore, the researchers discovered that their offspring had significantly larger LDL particles then those in the control group. Heart Disease is the number one killer of people in the United States.

The researchers took a look at 213 people between 95 and 107, and their children. For comparison, they looked at 258 spouses of their offspring and their neighbours. The lead researcher in the study, Dr. Barzilai, noted that there have been numerous studies to have looked at the risk factors linked to developing diseases common to old age. But this is one of the few studies that have tried not to identify risk factors of obtaining certain disease as we age, but to look at why certain members of the population do not acquire these conditions, especially among the exceptionally old population. Studying the genetic make-up of centenarians and their children, he said gives us a way to identify why these people show a remarkable absence of age-related diseases.

Of course we are far form having all of the answers as to why some people live healthily lives well into their tenth and eleventh decades, say the researchers. But these findings are brining us that much closer to understanding the role that genes play in longevity.

Dr. Barzilai believes their results to be significant because they mean that the mutation of the lipoprotein-manufacturing gene is clearly associated with living longer. Even more interesting, finding the same mutation in both the centenarians and their children suggests that the mutation may be inherited. So in that respect we may have found a gene that is at least in part a factor in living to 100.

Life Expectancy Tests: How Accurate Are They?

Exercise and Living to 100

Dental Health and Living to 100
Share Your Story, Join the Discussion or Seek Advice..
Many people commented both my parents looked at least ten years their age even in their seventies. My mother had a grand uncle who lived till age 104. My father said I were much stronger kid than my siblings. My elder brother said I had much better stamina when we were kids. A classmate said I broke all our school Shot Putt records ('C' Division, 'B' Division, 'A' Division, when we were age 13). Policeman said I looked at least twenty years younger than identification document. I completed recent sports competition beofre the last 10% (most of them 20 years my junior). A neighbour thought I were half my age. Stalked by married woman. Head-hunted by self declared gigolo for assistance. A blood screening during blood donation campaign showed above average red blood cell count. In the pink of health (skin turned pink under sunlight). Can see some blood vessels on my limbs clearly after some running. A recent basic health screening showed exceptional hand-grip strength. I come around to check if I could be among potential gene for centenarians (I seem to age very much slower than my peers (some others, half my age looked older). I looked like a man, not a boy.
Curious - 2-Jan-16 @ 7:13 AM
Title:
(never shown)
Firstname:
(never shown)
Surname:
(never shown)
Email:
(never shown)
Nickname:
(shown)
Comment:
Validate: