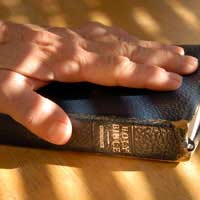 If you think that religion and spirituality play a significant role in the lives of centenarians, you would be 100% right. Regardless what particular religion they believe in, across the board almost all centenaries say they owe at least part of their long lives to "The Lords Help."

Most studies that look at the lives of centenarians have found that the way they deal with stress has almost as much to do with their longevity, as does healthy eating and exercise. Religion and spirituality have long been known to be a great mechanism to deal with stress. A recently published scientific study of centenarians determined that high levels of religiosity among centenarians helped in their overall coping abilities and positive outlook on life. This high level of life satisfaction bolstered by spirituality may in turn have contributed to their long lives.

Does Stress Result in Premature Ageing?

Dr. Thomas Perls of the New England Centenarian Project would tend to agree. In his on going study Dr. Perls found a very large number of centenarians to be religious. Dr. Perls feels that centenarians do not "sweat the small stuff" when it comes to stress. He believes that the world view centenarians gain from religion, helps them to do that.

Furthermore prayer, like meditation or Yoga can calm person, lower blood pressure, and bring a person to "inner peace".

But lest you think that puts living to 100 strictly in Gods hands, there is a scientific basis for all of this. If we accept that religion and spirituality can reduce stress, there is some astounding research that has linked stress to more rapid aging. A study found that the cells of women who were under constant stress due to raising chronically ill children showed the signs of premature ageing.

The chromosomes within a cell are capped with tiny structures called telomeres. It is the telomeres that allow the cells to continue to reproduce. As we get older telomeres get smaller and smaller, and when they become too short the eventually cause that cell to "age" - to stop multiplying and die. In these women under constant stress the telomeres would shrink prematurely, leading to premature cell death.

Be that as it may almost all centenarians Bellevue it is "God's will" that they have lived so long. In a lifetime of a century or more that often has a centenarian outliving relatives and close friends, a connection to God gives them something to hang on to, and a way to stay connected. Furthermore being born 100 years ago or more, almost all centenaries were raised in very religious homes, in a time when religion played a greater part in their everyday lives then it does today. Centenarian Cora Alice Clark, 103 of Salem Oregon says she remembers how every morning before breakfast her father would gather the family at the table and read form the Bible. "Then we all knelt to pray before starting our days activities."

Both Men and women centenarians report that religion has always been important to them. Those that are still physically able still attend church regularly. At least one, 100 year old Reverend Sidney Powell of Stuart Florida still leads services!

While we celebrate the lives of centenarians, and we marvel at the verve and lust for life some of them seem to still have, the inevitability of death is a grim reality for them all. But being this close to deaths door is also why religion seems to play such a large role in the lives of centenarians. Their faith helps them in their acceptance of death. Workers in nursing homes say that their centenarian charges rarely say they are afraid of dying. Indeed most accept that it is near, and trust in their spirituality to see them safely through to the "other side"

Do You Want to Live to 100?
Share Your Story, Join the Discussion or Seek Advice..
I have seen various classifications of 100 years or more olders.It looks details available to this Organisation is incomplete.In most of Lists,i have hardly seens persons from Asia. I am 66 years old,but seen one case of 108 years old Great Grand mother.She passed away one year back.
Not there - 12-Jul-17 @ 10:54 AM
My mother is 100 years and 7 days old.. She is active, alert, and continues to participate in activities (i.e.) cooking, gardening, and teaches a group of ladies on Friday Afternoons at Four crochet, knit, Swedish Embroidery.For her pre 100th birthday gala she made 100s of pizzelles so that guests would have a treat to take home.She continues to call "seniors" (folks younger than she) to make sure they are alright. She is losing her hearing but other than that she remains "sharp as a tack"… Her memory is better than many of us so much younger..Her advise to others is to "stay busy-stay interested and involved"… she is amazing!
Joye Fuller - 16-Jan-16 @ 11:11 AM
Title:
(never shown)
Firstname:
(never shown)
Surname:
(never shown)
Email:
(never shown)
Nickname:
(shown)
Comment:
Validate: