Home > Age Statistics > Does Living to 100 Run in Families?

Does Living to 100 Run in Families? 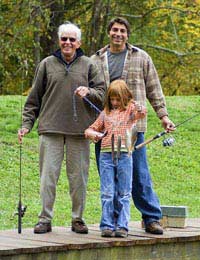 Longevity or at least extreme longevity as in those who achieve the title of centenarian does indeed seem to run in families. True there is the odd centenarian whose parents died young. It is also true that anyone can likely extend his or her lifespan by adopting the lifelong habits of centenarians. However researchers who study centenarians for clues on ageing constantly find the 100-year-old who “breaks all the rules”. They eat the wrong diet, they smoke, drink or like 104 year old Rhode Island native Michael Morowski, work in highly toxic environments. Michael was a coal miner for most for his life, but that did not stop him from becoming the oldest living person in Rhode Island, and recently taking part in the New England Centenarian Project.

Thomas Perls, director of the project found that Michael, like many other of the centenarians in the study, had a family history of longevity that stretched back at least two generations.

Quest for an Ageing Gene

Scientists have long sought a specific gene that determines lifespan. While no such “ageing gene” has yet to be found, there certainly seems to be a number of genetic factors that combine to influence who will lives to 100. As in most things in the nature/nurture argument, seeing your 100th birthday seems to rely on combination of both lifestyle and family history. The research seems to indicate that there is not a single gene that influences ageing, but in all of the centenarians studied there seemed to be a number of common genetic traits, that combined to help them age more slowly. And those few genes that were discovered that seemed to extend life were mirrored for multiple generations. Clearly longevity runs in families, and in some cases these genetic influences can be so strong that they can overcome extremely toxic environments as in the case of Mr. Morowski. On the other hand the study seemed to indicate that without at least some genetic basis to express long-life, it is unlikely that a person would reach extreme old age, like that of a centenarian, no matter how well they lived. Although a positive environment will allow any person to achieve the maximum lifespan his or her genes may predispose them to.

The Children of Centenarians

Current research also seems to indicate that not only are children of centenarians more likely to reach 100 years of age themselves, they are far less likely to suffer from various life threatening illnesses, such as cardiovascular disease. The American Heart Association recently released the results of a study that concluded grown children whose parents lived to be 100 years old or more have a markedly lower incidence of heart disease, than those whose parents died in their 70s. The study also found that the children of centenarians also had a lower risk factor of having a heart attack or stroke when they reached old age, than those whose parents died younger.

The research indicates that the children of centenarians have an advantage over the general population when it comes to cardiovascular health. In the study researchers compared 176 children of centenarians with 166 controls. The adults in the control group had parents who were born in the same year as the centenarians, but who died in their mid-seventies. The average age of the offspring in the study was about the same, around 70 years of age, in both groups. When compared to the control group the children of the centenarians had a 50% lower incidence of high blood pressure, heart disease, and diabetes.

It seems that what the genes of centenarians allow them to do is compress the time of greatest sickness and weakness into the very latest part of their lives. Almost invariably centenarians were relatively healthy through their 80’s and into their 90’s. And only later than that started to decline. Researchers concluded that if you have a strong family history for longevity you probably have some genetic protection, and can afford to indulge a little bit in terms of lifestyle. But if you have a family history of heart disease, high blood pressure, or the like you should do whatever you can now to put off what may be an inevitable illness to the later part of life.

Commonalties Among Centenarians
Share Your Story, Join the Discussion or Seek Advice..
In my family... Granny Rigg 101. Her daughter Anne, 100. Her daughter Bunty, 100. Her daughters Jan and Liz, 93 respectively. Two others, a son and daughter,Tom and Nan died in their 80's, Tom was a heavy smoker (who'd blame him after his experiences in W.W.II). Nan had a heart condition. Their father died in his 60's in 1943 of mphysema and lung caner but he was a coalminer and also a smoker. Genetics? Hmm.... (p.s. having cared for our elderly relatives as they slowly passed away, later generations of grandchildren (including myself) have no ambition whatsoever for such terrible longevity. As in the olden days. "A short life and a happy death! Please.").
JB - 25-Jun-18 @ 4:49 AM
This is all true of centenarians, but if one of your parents and grandparents lived into their 80s, then there's a good chance you will, too. Extrapolating that you can see how it would also apply to centenarians. At the same time, you can't take it as a certainty, as there are so many other factors involved in this that go beyond genetics and can't be easily factored into the equation.
William T - 14-Jun-12 @ 11:57 AM
There is a small island in the caribbean called Domiica, not be confused with dominican Republic, which has a very high proportion of centurians in relation to the general population. A few years ago, the oldest person alive was living on that island. Very pure and natural island.
manda - 15-Nov-11 @ 7:18 PM
Title:
(never shown)
Firstname:
(never shown)
Surname:
(never shown)
Email:
(never shown)
Nickname:
(shown)
Comment:
Validate: