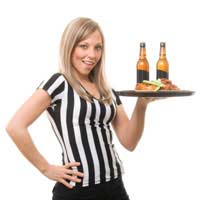 It’s not unusual for a guy to want to celebrate his birthday with a night out at “Hooters”, the internationally known restaurant chain, home to hot wings doled out by scantily clad well-endowed waitresses.

What is rather out of the ordinary is if the fellow is one John Persinger and the birthday is the leap from 99 to 100. This spunky centenarian loves the place, and since he is widowed his wife didn’t mind him being surrounded by young women in hot pants. Although John says it wouldn’t have bothered his beloved Vi, anyway, and she would surely have joined him. Seems John and Vi were one of the first customers of the local Des Moines Iowa Hooters when it open in1993, and had been regulars ever since. Vi passed on at 89 after the couple had been married for 72 years.

Persinger may not be your typical “Hooters” customer, but hitting the centenarian mark makes him a bit out of the ordinary to begin with. A male child born today has a life expectancy of around 75, when Persinger was born it was around 40. He also is not your typical centenarian. Of the 40,000 documented centenarians living in the US today, John is one of only 6000 who are men.

John says he really has no idea as to the secret of his longevity, "Good living, I guess. But I don't know how I did it. A lot of good food, steaks, fried potatoes. I sip a little Scotch now and then."

Unlike many cents that reside in assisted living facilities, Persinger lives on his own in a one-bedroom flat. But his kids and grand kids check in on him and help him constantly. And while he enjoys the shrimp and wings at Hooters, and not to mention the staff, he mostly cooks for himself. He says his deep fried onion rings, pancakes, chili, meatballs, and his own secret recipe for “Fried Mush” are tough to beat. Says John “All you go to do is fry till it gets brown add syrup and butter. Oh, it's really good."

John was a sailor and a WWII vet. He was the oldest crewman on the USS Nashville and witness to a deadly Japanese Kamikaze attack. It was December 1944, the Nashville was offshore of the Philippines when a Japanese plane came crashing into the ship, two bombs strapped to the wings. The bombs went off, flames engulfed the deck and bodies were everywhere. As Persinger tells it "He came right over the trees and hit us behind the stacks...” Persinger himself was unharmed but the attack left 133 sailors dead and 197 wounded. But adds Persinger “he didn't sink us."

Persinger returned to the Stases, but wasn’t finished, he also served in Korea. Yet through it all he and Vi somehow managed to raise three children. Which has since resulted in eight grand children, and 14 great-grand children.

A lifetime of Experiences

Over the course of his 100 years of life Persinger has milked cows as a farmer, worked in a rock quarry, and an ammunitions plant. He survived two wars and the Great Depression. He used the GI bill to earn a pilot’s license and flew Cessenas. He was still driving to Hooters at 98 years old, but on his doctor’s advice has since stopped driving. He continued to work part time as a diesel mechanic until he was 88.

At 100 he loves to play the harmonica, and loves to bang out “Roll Out The Barrel” at birthday parties, but not his own. Over 40 friends gathered at that celebration at Hooters. Persinger sat smiling widely in a chair, ate some wings, downed a beer or two and accepted lots of hardy handshakes and warm hugs.

But not all of his friends and neighbours approved of his choice of venues. Persinger said “This one guy at church kept saying 'Didn't you hear what the preacher was saying this morning about looking at girls and all that?' I told him “I was going to Hooters to eat chicken wings."

That may have been a little bit of a stretch, but at 100 we can forgive a “white lie” or two. Persinger has been seen asking the “Hooters Girls” if they'd like a 100-year-old kiss, and to a one they have all been known to accept.

Babies of Young Mums Have Twice the Chance of Reaching 100
Share Your Story, Join the Discussion or Seek Advice..
It's a great story and good for him. To be that age and still active and vital is a great achievement. We probably all hope we'll be the same. But as the average age of the population increases and more of us remain healthy, it might not be too long before chains like Hooters are offering senior citizen nights. Not that centenarians will be the norm anytime soon, but things can happen.
Tom - 7-Jun-12 @ 1:14 PM
Title:
(never shown)
Firstname:
(never shown)
Surname:
(never shown)
Email:
(never shown)
Nickname:
(shown)
Comment:
Validate: